Could Thailand’s Pork Industry Cause The Next Global Pandemic?

Pork is the most commonly consumed meat in Thailand, but many are unaware of the industry’s potential to cause another global pandemic.

Pork has a huge environmental impact, but this article is not about our planet’s health. It’s about the risk that the pork industry poses to public health. 1 Pig farming is a highly unethical practice that requires pigs to be huddled together in close proximity to one another. Coupled with poor and dirty living conditions, it frequently results in infectious disease emergence in pig farms lacking bio-security; many of which can mutate and spread to humans through the air, fluids, and contaminated food/water. 2

Highly infectious diseases originating in animals that are also contagious to humans are called ‘Zoonotic Diseases’. 3  Covid-19 is a zoonotic disease, which many believe may have spread from bats or pangolins to humans. Other well-documented zoonotic diseases like HIV, Ebola, MERS, Zika, Mad Cow Disease, The Black Death, and SARS all originated from animals and severely impacted humanity. One such zoonotic disease is called ‘Swine Flu’. The World Health Organisation defines swine flu as a:

“human respiratory infection caused by an influenza strain that started in pigs.”

A strain of swine flu that appeared in America in 2009 was believed to be the cause of approximately 151,700 – 575,400 human deaths globally (most being young adults and children). 4 The W.H.O classed the 2009 swine flu outbreak as a pandemic and it was a major cause for concern worldwide. Despite swine flu being prevalent globally, the demand for pork continues to rise, and the Thai pork industry continues to grow.

Although Covid-19 has shone a light on the seriousness of mutating zoonotic diseases, its media attention has overshadowed pig outbreaks over the last year, allowing pig diseases to spread with little report. In September last year, animal livestock officials in Mae Tha district declared a “disease control zone”, to prevent an outbreak of African swine fever (a DNA virus that is not contagious to humans), which resulted in the deaths of hundreds of pigs in the district weeks before. And just last week (May 28th, 2021), Vietnam announced that they are suspending all pig imports from Thailand (from June 30th, 2021) because Vietnamese officials discovered 980 Thai-imported pigs that were infected with African swine fever. 5 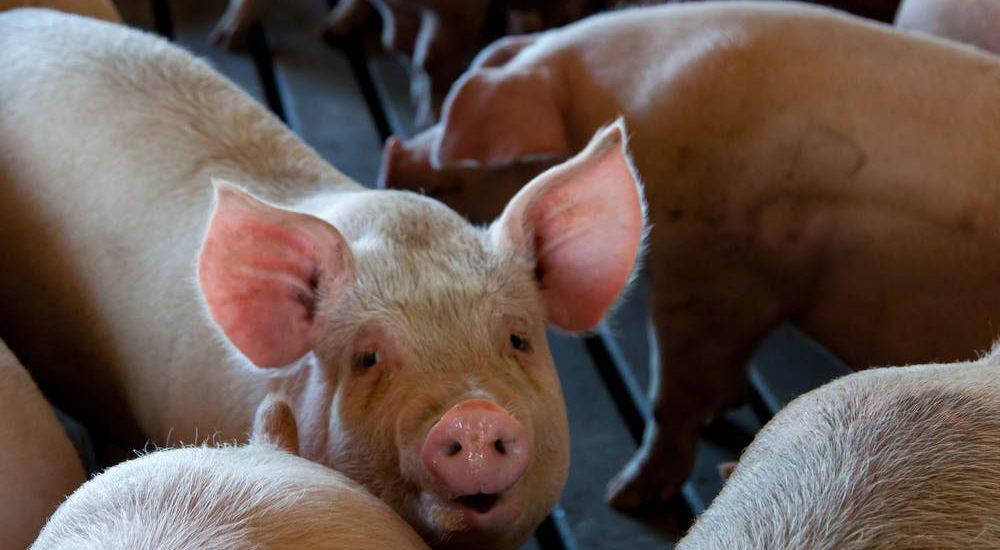 A slight genetic mutation of the swine flu H1N1 valiant similar to the 2009 outbreak in America could be catastrophic for Thailand. The Department of Livestock Development (DLD) estimates that the total number of farmed pigs alive in Thailand at any given time is over 10 million! Data shows 36% to 40% of pig factories and farms are concentrated in the central provinces that surround Bangkok. 6  If we consider that Bangkok is the largest hub of people in Thailand, this leaves a large percentage of the Thai population vulnerable to what could potentially be the start of the next pandemic.

Prevention is better than a cure. If we stop eating animal products today, we cut off the funding for the meat industry. This means fewer animals living in horrific conditions, where the potential for contagious disease and mutating variants has a high probability of occurring. A healthy, ethical and sustainable planet is our future. Let’s transition towards a plant-based diet, to help prevent another global pandemic… because the next one could be much worse.

The catering at the G7 summit held in Germany last weekend was completely meat-free (vegan and vegetarian), with fish and meat only available upon request.

Hexa, the PETA approved vegan company known for their vegan shoes, have branched out into the world of vegan beauty!

Stay up to date with sustainability news!

The catering at the G7 summit held in Germany last weekend was completely meat-free (vegan and vegetarian), with fish and meat only available upon request.